A Remote Year of Fitness

Staying in shape is a challenge regardless of your living/travel situation. It becomes even more difficult if you are constantly changing locations. One of my goals this year was to at least maintain the condition I was in when starting Remote Year. 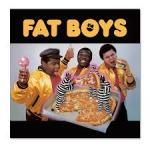 Trying all of the local cuisine (and beverages 😉 )throughout the year , I knew that if I wasn’t careful, I could easily eclipse my pre-RY peak of 202 lbs (aided in no small part by my inner fat boy’s love of chicken & waffles and large country breakfasts).

Despite gyms in every city we lived in, I needed an even simpler option. I’m simply not that motivated to go to a gym on a regular basis and paying for something that I won’t use is a non-starter. My goto exercise needed to be simple and fast, hence my preference for HIIT (High Intensity Interval Training) and walking.  I used the 7 Minute Workout  and Pedometer++  apps as my baseline. Confident that I had everything I needed to maintain this regimen wherever I went, my basic goals were to walk 10,000 steps each day and do the 7 minute workout 3 times a week. Everything beyond that was a bonus.

Everyone was keen to get the year of to a good start, so there were lots of informal groups formed around fitness such as football, running, basketball or general fitness workouts. I tried to participate in as many as possible to supplement my basic routine. Fellow Battuta, Anton was a boxing
enthusiast and we began a boxing workout that 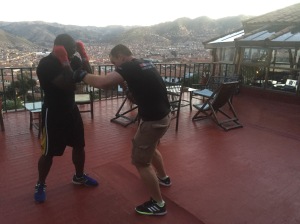 included a run to/from the parks where we would train. This definitely helped kick things up a notch and we were pretty consistent until months 3 and 4, when we moved to the higher altitudes of Bolivia/Peru. We did finish strong as a group by starting the Insanity workout program in the 4th month using the high altitude to take our fitness to a new level.

The workout routine that I developed in South America was disrupted by the departure of a number of remotes. I began month five in London with a daily 5K. Runs along the canal were a nice break from my cramped living quarters. I managed to make the best of it by successfully continuing the 7 Minute workouts in my room. 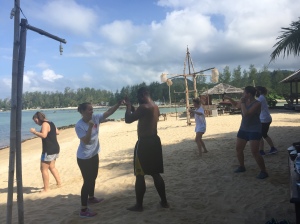 I reasoned that if I could do the exercises in such a small space there was no reason I couldn’t to them anywhere. Europe was also the place where I started playing football. Full disclosure: I’m crap at football but I enjoyed being part of the group.
Don’t underestimate the positive aspects of a social group for maintaining a fitness routine. I took this to heart and created a boxing club for those who wanted to learn the basics and add a little variety to their workout routine.

The first month in Asia was similar to the other first months of the previous legs. Getting adjusted took time and I reverted back to my 3x a week basic workout of 7 Minutes plus a basic boxing routing (sans heavy/speed bag). Because the first 2 months provided pool access, I decided to add a bit of swimming. 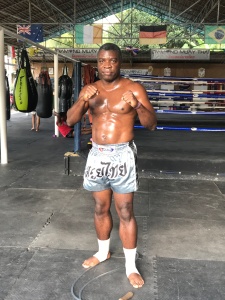 It’s definitely something that I will keep as a part of my routing when available. It’s a great full body workout. The highlight of this leg of the trip was by far my ability to train Muay Thai in Thailand. I don’t have many things on my bucket list but this was one of them. While in Koh Phangan, I truly thought I’d achieved fitness nirvana. I rode my bicycle 30 minutes each way to train for 2 hours. Despite my excitement, injuries did slow me down. I sprained my foot while training Muay Thai after executing an almost perfect counter leg sweep. This began the downward spiral that would be the theme of my Asian segment. My football career ended sadly on a pitch in Phnom Penh, much like my basketball playing days in Prague. By the final month of Remote Year in Vietnam, I’d racked up shoulder, knee and foot injuries that would reduce me to simply walking for exercise.

In spite of the injuries, this year was epic from a fitness standpoint. I had fun working out with others and participating in the various fitness programs and sports. I ended up about 15 pounds less than I did when starting the year, halfway to my target (170 lbs). I’ll spend the next the few months with the base routine and a focus on diet. I’ve spent the last 12 months eating and drinking pretty much whatever I wanted and I need to reduce and improve my intake. Now I can spend time recovering from my injuries in preparation for more training while in Asia. I’ll also be a including a lot more preventative measures such as stretching, yoga and wearing ankle and knee braces.

2 thoughts on “A Remote Year of Fitness”